Update From The Black Hops Taprooms Regarding Coronavirus

The Evolution Of Our Beer Design And Packaging Process

Those of you who have followed the dark hop journey since its early days will know that while our distinctive logo remains our signature identity, the design of our cans and cartons has undergone a natural evolution.

This is because we locked down our core product line, brought our beers to venues and retail stores, and expanded our brewing repertoire into the diverse world of collaborations, limited release beers, and recon series beers.

In this post, we’ll revisit our original packaging and labeling before discussing our current approach and the design process behind the look and feel of our cans and cartons. 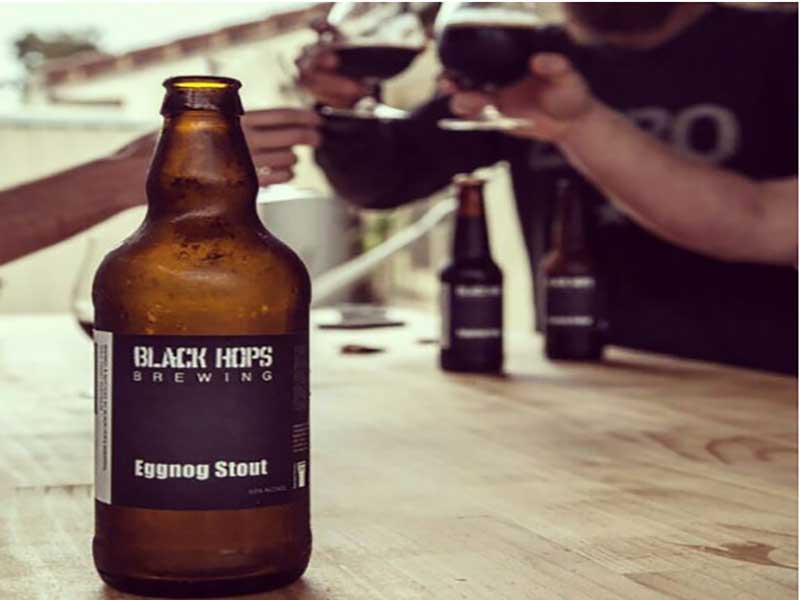 It’s been a fun campaign that dates back to our packaging and label design until we first opened our doors to our Burley brewery (HQ) in June 2016.

In fact, if you want to get old school, take a look at the bottles of our first batch of Gypsy Brewed Eggnog in 2014. At the time, opening our own brewery was still a flashpoint in the eyes of myself, Eddie and Goffs.

We had three weeks before brewing the beer and naming the brewery brand and label. The founders agreed that “Black Hops” was the best of a bunch of really bad names, and I Googled “military font”, downloaded the first free font, and created our first “logo “.

After experimenting with the military helicopter on the label, we landed on a simple black label with a military-inspired FREE logo and a subtle speckled texture. The logo remained in place until 2015,

when we decided to get serious about our business and planned to open our own brewery and restaurant, at which time we underwent a complete redesign, including the logo today.

One of them is the new branding of the first bottled beers we produced, as shown below. Note that these are physical models and not photos, in those days we couldn’t afford a professional photographer to take pictures of our product!

April 2017 was a watershed moment in the development of Black Hops with the launch of our signature beer, Pale Ale, which coincided with our shift of all beer from bottles to cans for many reasons, which we talk about here on the blog.

The original design of our pale ale cans, and the 12 cartons they came out in, were designed by me and talented designer Matt Vergotis, who was instrumental in many of the early concepts related to the dark hops logo and package design.

I found Matt on the Dribbble site, not really expecting to find a local designer, but one of the best I’ve found on the Gold Coast!

We invented a universal printed can with a label of the beer itself. The can is a simple, eye-catching (almost) black design with a military-inspired mesh band at the bottom, our logo prominently displayed, and an enlarged individual flower bet.

We also added the slogan “The least concealed operation in the brewing process” to the top of the can.
We designed the stickers to be very thin, perhaps 20% of the can’s height, so they didn’t overwhelm the aesthetics of the can and, more importantly, they were inexpensive for us to print.

As the information needed on the cans increased, we lengthened the labels to accommodate the new inclusions (but never widened them).

This is a beer can next to a wine glass designed by one of our earliest professional photographers. 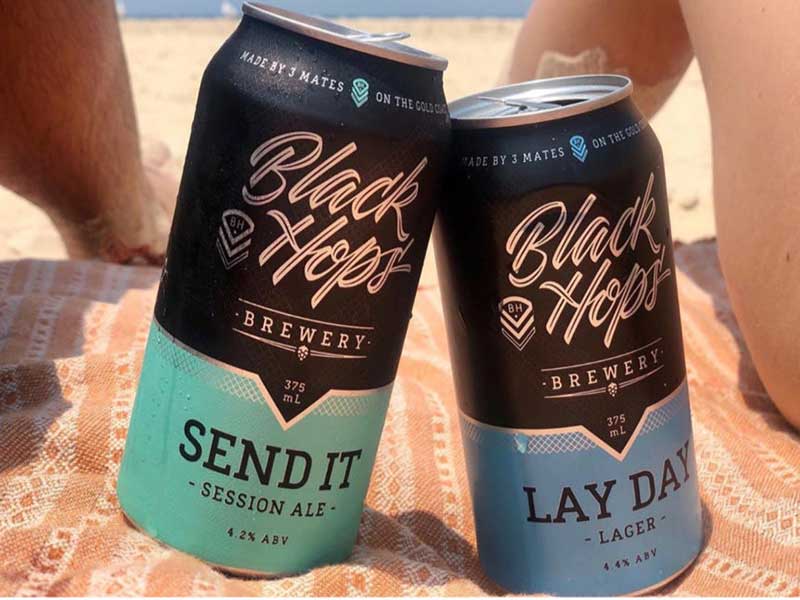 Speaking of cartons, we were looking for a more suitable price point to enter the market, so we decided to go for 12 packs instead of the traditional 24 packs. We were also looking at the cost of sending online, and for the Sendle system we were using at the time,

12 packs was less than 5kg and reasonably priced. Printing full-color cartons was both expensive and inflexible, so we printed a generic carton, as well as a beer-specific label.

From a design perspective, it was a great start to our journey and we received industry recognition at the 2017 Eibar Beer Awards, where we won the gold medal for light beer packaging.