I. Analysis of the development status of beer brewing equipment industry

1. The competitive landscape of the beer industry

2. There is huge room for improvement in per capita consumption in emerging markets.

Per capita consumption by continent (L/year) 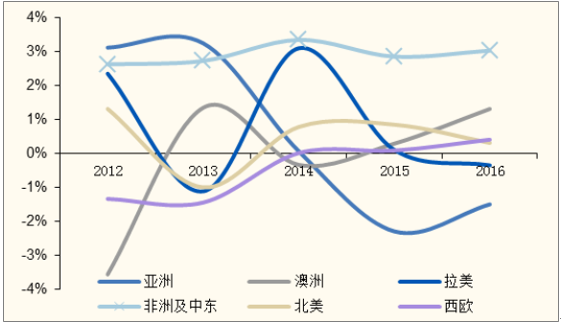 Due to the decline in the growth rate of mature markets, major beer giants have begun to develop new markets, starting from Asia and gradually deploying to Africa and Latin America.

With the development of the Southeast Asian economy and the booming tourism industry, beer consumption in the region has maintained a medium-high single-digit growth rate in recent years.

Growth in beer sales in some countries in Southeast Asia

Craft beer is a niche beer with a unique flavor compared to industrial mass beer, which is produced in a small amount and produced by traditional processing techniques. The purpose of large-scale industrial beer is to obtain more profit and market share at the low cost, resulting in a single variety of industrial beer, which gives small breweries a huge space for brewing a variety of hand-made craft beer using craft beer equipment.

Comparison of craft and industrial beer

Due to the significant difference between craft beer and industrial beer, craft beer is more and more popular among consumers. Young people who pursue unique taste and personalization become the main consumer groups of craft beer. Craft beer has become a popular market in Europe and the United States, and in China, craft beer has just been known to a small number of consumers, and the current penetration rate is less than 1%. Driven by the demand for consumption upgrades, craft beer has a broad space for growth in China.

In China, the overall beer production has reached the bottleneck value of nearly 50 million liters, but the total amount of imported beer has risen against the trend year by year, and the CAGR has reached 45% in the past five years. The explosive growth of imported beer reflects the strong demand for high-end products. 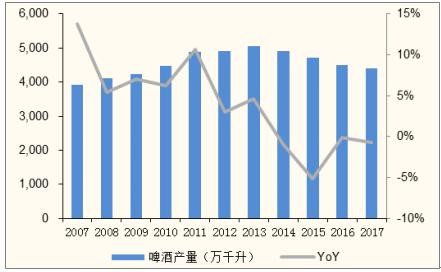 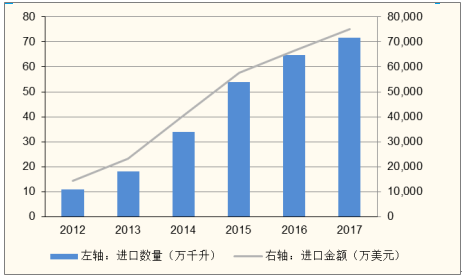 From the perspective of the supply side, the domestic beer industry has gone through the era of price competition and staking. The current domestic beer has occupied most of the market share with several local brands such as China Resources, Qingdao and Yanjing. The simple price competition has obviously restricted beer. The profitability of enterprises, the motivation of upgrading the brands of major wine companies is strong, and the products will shift from the low-end to the middle-end, of which craft beer is an important category.

In contrast to the United States, craft beer began to flourish in the United States in the 1990s, when the industrial beer market was monopolized by several major beer groups, but after nearly 30 years of development, the market size of craft beer rose from 5% at the time to the present. 22%. At present, China has already had the initial conditions for the development of craft beer, that is, the concentration of industrial beer has reached a high level.

China’s leading beer companies have launched high-end, personalized product lines, and propose or practice the craft beer strategy: Qingdao is developing refined varieties, Yanjing has opened a new production line for craft beer, and China Resources’ investment company is Do a lot of research on craft beer, and have close contact with some independent craft beer brands in China. In addition, Zhujiang Beer announced in 2017 that it will invest 250 million yuan to invest in craft beer production line and experience store construction.

Around 2013, China’s first- and second-tier cities have preceded the industrial beer giants, and a number of local craft beer brands have emerged, such as Beijing’s Panda, Beijing A, Youhang, Dayue and Niu Beer Hall; Shanghai’s Tap House Workshops, Boxing Cat Boxing Cats, Dr.Beer, Shanghai Brewery, Leybold, etc. Among them, products such as Panda Brewery, Leybold and Gao Master have appeared in boutique supermarkets, convenience stores and restaurants. In addition, the international beer giant has taken the lead in the craft beer market. Anheuser-Busch InBev established “ZX Venture” in 2015 to collect and invest in Budweiser InBev worldwide and to purchase niche craft beer brands, as well as offices in Shanghai, China. Judging the craft beer will be the key word for the overall development of China’s beer industry in the next 5-10 years.

At present, the penetration rate of China’s craft beer in the overall beer market is less than 1%, and the average annual increase of 1% penetration rate is conservatively estimated. The craft beer needs to reach the annual purchase of about 500,000 kiloliters of equipment, with a single equipment. The estimated capacity of 100 kiloliters (100 tons) is about 5,000 pieces of craft beer equipment per year, corresponding to the domestic market scale of about 50-6.5 billion yuan per year.